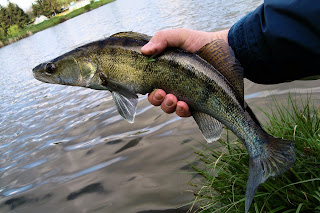 I just got back from my short trip to Poland. It was a good one and a half week time off, I fished most of the days. As I suspected the water level in Nida river was high again, which made it almost impossible to fish. Instead I focused on the ponds in my hometown, Kazimierza Wielka. I knew that I'm not going to catch anything spectacular, but I made it in the quantity. 41 pikes and 3 zanders in 9 days. Not bad I think. One day was especially good, I landed 14 pikes :-) I fish almost only with the artificial lures (some dead baiting in the colder months), while the locals fish almost always with the live bait. If I came across somebody with the spinning rod, he was using a small spinner or a ripper on a jig head. My lures are rarely smaller then 10cm, so when the local anglers saw what I'm casting in to the water they were amazed. I'm happy to say that my methods were very effective, while the local anglers caught maybe1-2 or none pike per day. At the end of my stay I became “a recognizable person” :-)))

I tried also drop-shot method for the first time and I think I'm going to spend some more time mastering it during this season in Holland.  I had a nice ~70cm zander on the hook, but I've lost it when it was almost in the landing net – too bad :-(

It will be a round year until I will go to Poland the next time. I'll try to participate in the local pike fishing competition next year and maybe rub the locals noses this time (I came 3rd in the September 2010).
No comments:

Majk
Hi! My name is Michał, few years back I moved to the Netherlands where I chase pike using all possible methods incorporating artificial lures, recently got hooked on fly fishing. I would like to share my pike fishing adventures with you!